skip to main | skip to sidebar

Read and sign a protest letter here on a Nigerian citizen that died while being deported from Spain.

Have a wonderful week!!

It's been a while. I didn't have internet access for a few days (it felt like ages) and was busy busy. How are you all doing? Good I hope :-).

NLC starts their nation wide strike at midnight today and they don't plan on calling it off until the price of fuel is back to 65 naira per liter.

The NDS blog needs hosts for the friday series. Leave a comment there if you're interested in hosting.

Links to check out (if you've not already done so):
Blogville Idols
African Loft

A quote from last week that caught my eye:

"I thank you for your visits although I had actually wanted you to stay at home.
Well, you are the lucky ones. All those including Katsina that wanted to come
with a strong delegation to congratulate me, i told them to stay at home and do
your work, and allow me and my colleagues in Abuja to also do our work"

- Yar'Adua in response to a Kaduna state delegation of over 250 members that paid him a solidarity visit.

Can this help the situation in Darfur? This is the second time I'm actually reading about boycotting next years olympics for Darfur.

Song for the day: Africa Unite by Bob Marley.

Later people, and have a wonderful rest of the week!!
Posted by Nilla at 10:36 PM 11 comments: Links to this post 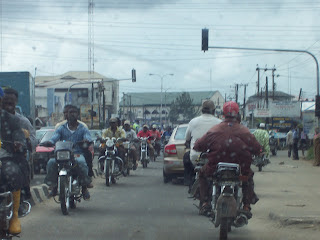 Normally, when I get on an okada (commercial motorcycle/bike), I tell the okada man to be careful and not throw me off the bike. Sometimes they laugh and tell me they won’t throw me off, or just nod their heads. But yet, I have to continually keep tapping them and telling them to keep their stunts on the down low…”Oga, no throw me for ground oh?” Some of them actually slow down, while some of them continue moving recklessly and no amount of shouting will make any difference, like the one I was on yesterday, that had me ducking poles hanging out of a truck (like he couldn’t calculate that the poles hanging out weren’t higher than our heads…yeah right!!).

Oh, and they move in both direction even on one way roads/lanes!

I think okada’s should have their own lanes on roads, especially those areas with heavy traffic. It would reduce accidents and near-accidents on our roads.

What do you think?
Should lanes for okada be considered when designing and constructing new roads and also when expanding some of the existing roads?

Have a wonderful weekend!!! 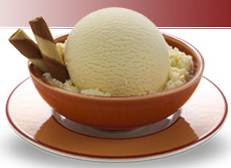 All youtube videos; pictures of movies, celebrities, maps, smileys and novels; my profile avatar; the ice cream picture directly above, are not my own.